Friday, September 08, 2006
11th September 2001 Most forums have cleared up their posts from after '9/11', some don't keep that many years available. The rec.climbing' posts on Google are still around, the anger and outrage preserved. The first one starts with 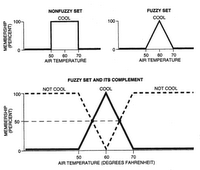 It used to be fairly straightforward what a climber was, after an apprenticeship you just became one, a simple binary state. Things aren't so clear cut now, take a look at this thread on UKC.

"I decided to terminate the climb"
We've never heard a climber say that before, we thought termination was the prerogative of the climb, not the climber. The hook line on this post was "I would welcome comments and thoughts from other climbers on this". Judging by the hit rate on the thread alot of climber read this and just shook their heads and browsed away. Actiongirl76 has not displayed any of the qualities of a climber - in her position we think the correct response of a 'real' climber would be to go away climb more, train harder, come back and learn from the experience.

So what makes a climber? a SPA? I imagine the only person interested in a SPA would be a lawyer. Louise Shepherd is a climber, she did an interview for www.chockstone.org, we wonder what she would make of actiongirl76?

Between these two extremes something happens when you become more 'climber like', you can't teach it, it's not on the curriculum of any outdoor education course, it's more of an attitude really, a subconscious state of mind born of a physical activity.

While we on chockstone.org we found this 'Quote thread' that has been running for 2 years, the opening post makes a pretty good test of 'climberdom', if you agree with this

"Life's journey is not to arrive at the grave safely in a well preserved body, but rather to skid in sideways, totally worn out, shouting "f&ck what a ride"."

you're in the club!

Have a good weekend, it's a great forecast.

Wednesday, September 06, 2006
Norrie off the Naughty Step! After two weeks in the UKC Sin Bin, Norrie returns to the fray. Who'd have thought that! That old grizzled mountain man writing an apology to Alaim. Anyway we've opened an office sweep stake to see how long he lasts this time. Already the Great Pretender seems to be on his case, and it won't be long before the 'feral posters' bring him down again. It's a bit sad really, so we were thinking how do you deal with stuff like that in a forum where you can't go all the way - as it were!

Well in an attempt to help keep the forums clean we at IP-C have decided to host a service for all climbing forum users.

The Parking Lot
The Parking Lot™ is IP-Climber's new conflict resolution and new climber initiation and training facility. Ever had a problem with another poster on a forum, you know they are alway there on your thread, sniping at you. Or maybe you've just read a post so unbelievably dumb that there is no other option but to flame the miserable little worm. Well now there's a way to do it without the risk of getting banned.

Ask them to 'Step Outside' either on the thread or via e-mail. Contact us and we will schedule a slot for you and your opponent in 'The Parking Lot'.

Contests will commence in October.

Thursday, August 31, 2006
Go Climbing - Followup Snow + Rock was founded in 1982, with the Kensington shop (Is this anything to do with Alpine Sports?) by Mike Browne. In 2004 it was sold to Andrew Brownsword, founder of Forever Friends greetings cards. Maybe that explains its rather fluffy view of the world. We vaguely remember a thread on it at UKC
It would be easy to be forced into an anti business stance after reading 'Go Climbing' so we took a look around some of the retailers websites. So from the opposite end of the spectrum lets take a look at how Needle Sport offer advice to the young climber. Take a look at this page.

Ultimately climbing is a dangerous sport and claims many casualties each year. One of the guiding principals of British climbing and mountaineering is that it is the individual climber is responsible for his or her own safety. If you can not accept this then this site and probably climbing in general is unlikely to suit you. May we refer you to this very interesting site instead!

There you have it, the Primary Axiom of climbing, climbing is crazy, no sane logical person would reasonably want to take part in it, and if the thought of accepting and dealing with risk does not appeal to you try, something else. We think you can do business and retain your integrity, at the end of the day it's probably the consumers' responsibility to think before they open their wallet.

Before we leave this Snow + Rock thing behind we found a page where you could ask Andy Kirkpatrick or Ian Parnell a question directly, well we couldn't resist - could you...

Well to Ian's credit he got back pretty quick to the annoying little oik....

He did give a reasonable overview of popularist thinking on "helmuts" and didn't just push the most expensive one, however we wondered what Ian thought of the 'Go Climbing' web article? Does he do what he does because of the "improved aerobic fitness", the "inclusiveness" or the fact that it's "a great family activity"?

Monday, August 28, 2006
Climbing gets a corporate makeover Expert advice from Snow and Rock, I found this recently, it's one of their "Go Guides", this one tells everyone about climbing, it starts

The feeling of pulling over the top of a sheer rock cliff is one you will never forget; the drop beneath you, the sun setting on the horizon and the adventure shared with your friends. People come to climbing for many reasons. For some it is a love of the outdoors and a chance to explore places where few have ever been, for others it's the physical and mental challenge of making that move that you previously thought was impossible. The health benefits of climbing include improved aerobic fitness from the approach walks, a balanced improvement in muscle tone and vastly improved balance and flexibility. Perhaps the main area of benefit is the increased confidence as you learn to overcome the challenges of the vertical world. Whatever the reason you decide to start climbing, the one thing all climbers share is that ear to ear grin of exhilaration at the end of a day's climbing.

The next paragraph begins....

Climbing is one of the most inclusive sports around. 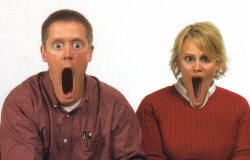 A small amount of general aerobic fitness is useful just to get you to the base of the crag, but the myth that you have to have arms like Popeye to get to the top is just that - a myth! In fact, most climbs reward good balance, footwork and technique over sheer brawn, meaning that women, with their typically lower centre of balance and better flexibility, can progress very quickly. One of the best things about climbing is that you're not competing against anyone else; you set your own targets and try your best. It's up to you whether you want a gentle day out traversing the rocks in between sun bathing at a Pembroke beach or a full workout at the overhanging limestone cove of the Yorkshire Dales. Climbing is a great family activity and many climbing walls offer children's clubs.

The next paragraph implies Baggy Point is on the South coast of Devon and the BMC is the 'governing body' of climbing. Later it advises how to start climbing and tells you where you can climb in the UK.
*EMPHASIS IS MINE 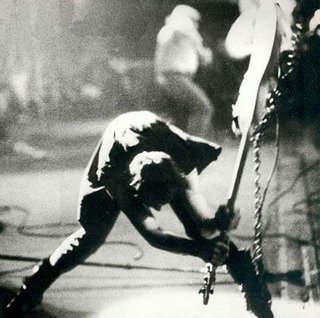 Post modernistic deconstructional corporate bullshit or just plain wrong. There ya go a hundred years of climbing evolution, the aesthetics of Buhl, the anguish of Bonatti, the grit of Whillans reduced to "improved aerobic fitness". Climbing is being rebranded and packaged as a product in a corporative range, nicely sitting between skiing, mountain biking and those 'way radical' extreme sports. Written by a twenty two year old corporate whore whose only interest in climbing is the corporate ladder!

Boy am I in a bad mood now!

Cripes what a week at UKC! Monday I'd just finished my Posting Policy Document(PPD). Then started to work on my flow diagram to help the moderators. It's really clever they ask themselves 33 questions to which they answer Yes or No, this then guides them through a decision matrix, if it's a dispute between two posters, they then run a credit check and zap the one with the lowest salary. It's great.

Charles is weally getting on my nerves at the moment, he's stomping round the office muttering something about tide information, I thought I'd get Andrew to test out my new flow diagram, any way he got a bit confused(bless him) and zapped everyone, yep 150,000 e-mails got sent in under 0.5 of a second, crashed the mailserver, took out the database server, and UKC took an outage. Yikes, the phones went ballistic, all those advertisers......

Just then Michael decided to go and play with those bouldering boys. I was up all night fixing the servers. Next day as I was trying to get caught up it crashed again. Andrew says he never touched anything but I'm very suspicious.....

Next thing I know Michael comes back with his face in a hankerchief, that's the last time I'm letting him play out with those ruffians. Friday we eventually got all the children settled back into place and it was back to business as usual.

Thursday, August 24, 2006
Bouldering Special Thanks to Bubba for the link on that Cocktalk thread, and thanks to Houdini for this nice piece of photoshoping. So something for you boulderers that have made your way over here, sorry if it's a bit lame.

We( at IP-C) aint boulderers per se, but I remember as a lad(back in the 70's), just after I had started climbing I found a book in a bookshop, all winter long I'd go back in each weekend to look round the gear shops and check that book out. I swear I almost read the whole thing without buying it. One photo stopped me dead in my tracks 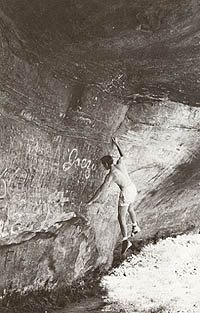 The book was Master of Rock: The Biography of John Gill by Pat Ament. It expanded my view of what climbing was. The next spring I started bouldering on railway and canal bridges near my home.

John Gill occasionallly posts on rockclimbing.com here's his profile. Tab along the box to check out his photo's. In one of his posts he states

"I knew I was a boulderer when Yvon Chouinard told me I was one, in the mid 1950s"

I guess it was the mid eighties I became aware of Jim Holloway. I'm just so impressed that some of Holloway's problems haven't been repeated since the 1970's, what the hell are you guys playing at? John Gill's website has an article on him. Also he occasionally comes up on the Forums.
Another popular one is the Strength to Weight ratio, here Supertopo.com kick the subject around with some input from the usual suspects. Oh yeah and check this out for a bouldering pad

Have a great Bank Holiday weekend's climbing/bouldering or whatever. 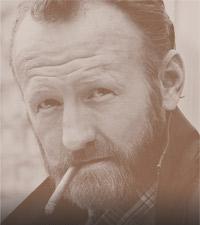 UKClimbing.com is not the problem, it is merely a symptom.

Think on that glasshopper.

Alot of great threads get drowned out by the cacophony of grade spats, whining newbie questions and the general background chatter of the web. This is my selection from over ten years lurking in climbing websites. A sort of 'Our Correspondent' meets 'Private Eye' for climbers on the web. Remember climbing is dangerous, climb at your own risk. The same can be said of posting.